The "Ghost" of Muriel's Restaurant

There is so much crap out there being passed off as “accurate” and “authentic” that it is positively galling!  It doesn’t really matter to many tourists who only see New Orleans as a giant theme park and ghost tours are to be enjoyed with Mardi Gras beads (in July), a t-shirt that reads “I Put Ketchup On My Ketchup” (whatever that means!) and a Huge-Ass Beer in hand.  But it does matter to those who are interested in learning about and preserving the amazing history of this amazing city.  Take Muriel’s Restaurant, for example.  Muriel’s has a “Ghost Table” set up at the end of their carriageway which is reserved for the ghost Pierre Antoine Lepardi Jourdan.  Ghost tour guides stand at the doorway, encouraging tourists to peer in while they tell, ad nauseum, how Pierre inherited that building from his father and promptly lost it in a card game leaving his mother homeless for which he committed suicide by  (depending on the tour guide telling the tale) gun shot, hanging, jumping out a window...whatever.  Most of them are telling the tale as they heard it 3rd and 4th hand without even checking Muriel’s version of the story.  Let's have a look at it from their website:

“In 1718 New Orleans was founded and a young French Canadian named Claude Trepagnier was awarded this piece of land for his assistance in the expedition. Trepagnier built a small cottage, which later became a prime piece of property, due to the fact of its proximity of the area that soon became known as Jackson Square during the layout of the Quarter in 1721. Some locals believe that this structure used to hold slaves when they came off the boats, before going up for auction. Although Muriel's carriageway dates back to the late 1700's, and some clairvoyants say that many troubled spirits reside here, this area was said to be where servants were housed in the evening.

“Around 1745 Jean Baptiste Destrehan, a man of great power and wealth considered to be the Royal Treasurer of French Louisiana Colonies, acquired the property. He immediately tore down the humble little cottage and built an elaborate home of grandeur for his family. After his death in 1765 the house was passed down to his son and then sold at an auction when the family money ran out. In 1776 Pierre Phillipe de Marigny purchased the grand residence and used it as one of his "city homes" when he came into town from his plantation on the outskirts of the town, known as the Fauberg Marigny area today.

“On March 21, 1788, the Great New Orleans Fire started on Good Friday and burned 856 of the 1,100 structures in the French Quarter, including the city’s main church, original Cabildo, the municipal building, the army barracks, armory, and jail. During the tragedy, a portion of Pierre Phillipe de Marigny’s mansion was burnt.

“During the next decade, the city of New Orleans was in a rebuilding process, trying to recover from the fire that swept the French Quarter. The Spanish replaced what was left of the wooden buildings with thick brick walled structures that included courtyards, arcades, and wrought iron balconies. Among the new buildings in Jackson Square were the St. Louis Cathedral, The Cabildo, The Presbytere and a piece of property Mr. Pierre Antoine Lepardi Jourdan purchased from Marigny.

“Pierre Antoine Lepardi Jourdan built his dream home restoring it to the original grandeur, for his family and himself. Although Jourdan dearly adored his beautiful home, he was a man that could never quench his thirst for the thrill and excitement of gambling. In 1814 he wagered his beloved home in a poker game and crushingly lost the one thing he treasured most in life. The shock of the loss was so intense, before having to vacate the premises and hand over his beloved treasure, he tragically committed suicide on the second floor in the area that served as the slave quarters-the same area where Muriel’s Seance Lounges are situated today.

“Pierre Antoine Lepardi Jourdan is still with us today in spiritual form on the same piece of property that is now Muriel’s. His ghost doesn't appear in human form, but instead as a glimmer of sparkly light wandering around the lounge. Our Seance Lounges on the second floor are named as such because it is believed that this is where Jourdan spends the majority of his time. Patrons and employees of Muriel’s have also witnessed objects being moved around throughout the restaurant. We believe Mr. Pierre Antoine Lepardi Jourdan never left his true love and home in New Orleans, he continues to reside here to this day.” 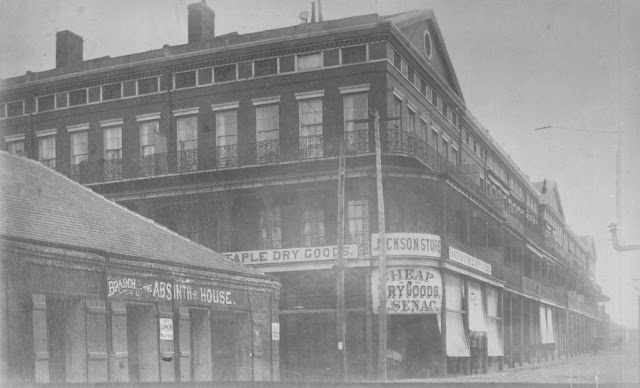